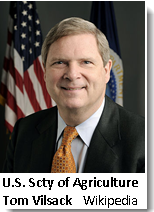 Not many people like the messes Congress makes but everybody should see how they’re made.

This article takes a close look at the legislation just passed by Congress and signed by President Obama allowing the Secretary of Agriculture to issue executive orders that bypass regulations, safety, and science for the purpose of speeding genetically modified organisms (GMOs) and genetically engineered seeds (GE) and crops to market.  The way the law is written, Secretary Tom Vilsack can lift restrictions on GMOs for a set period and, it appears, do so without hindrance from the courts.

Are genetically modified organisms (GMOs), seeds, and crops  safe for human consumption?  How has the scientific testing of these seeds been conducted and what are the results?  Is there undue influence of the government and legislative process to fast track the delivery of GMOs to market?  Who benefits from that influence, if it is present, and how are the benefits derived?

There is a claimed scientific consensus that GMOs are safe for food production but there are detractors and the general public is wary.  Most of us have or are eating food from genetically engineered seeds and crops.  In the U.S., 88% of the maize and soybeans are from genetically modified seeds.  These seeds are called “green seeds” to ride the environmental band wagon.  They’ll solve world hunger too, according to some biotech advocates.  A review of studies on crop yields, however, shows that the impact of GMO’s the actual yield of crops is not significant.

There can be little doubt that the legislation neuters the principles of open law making and government and scientific requirements for distribution of GMOs and GE seeds and crops, legislation tucked away in the budget act just passed.

There is no doubt that a leader in corporate food technology, Monsanto, is well represented in the Obama administration.  In 2010, the president appointed Mark Taylor, former Monsanto Vice President and lobbyist, as the Food and Drug Administration’s food safety division.  That’s real influence.

The beneficiaries of this legislation are clear.  Whenever they come up with a very special Franken-gene, Monsanto, Lilly, etc., are off the hook and ready to roll without obstacles.  They just need a special order rubber stamped document  from the Secretary of Agriculture.  If he’s too busy, they’ll write it for him.

The following analysis of the specific legislation is important.  A review of the actual language shows how the turn of a phrase in a back room can make the U.S. government a partner in the furtherance of GMOs or any other product or service from an industry or group with the money and power to get things done.

The passage below is from the March 20, 2013 budget bill, the focus of controversy.  If you read the language marked in bold print as one statement, you get a sentence (of sorts) that says the Secretary of Agriculture “shall” issue regulations to override impediments (e.g., court rulings) to the distribution and marketing of GMO’s and genetically engineered crops.  The details of the linguistic slight of hand are explained after the passage.

In the Senate of the United States,

Resolved, That the bill from the House of Representatives (H.R. 933) entitled ‘‘An Act making appropriations for the Department of Defense, the Department of Veterans Affairs, and other departments and agencies for the fiscal year ending September 30, 2013, and for other purposes.’’, do pass with the following

Strike all after the enacting clause, and insert in lieu thereof:

SHORT TITLE  SECTION 1. This Act may be cited as the ‘‘Consolidated and Further Continuing Appropriations Act, 2013’’.

8 SEC. 735.
In the event that a determination of non-regulated status made pursuant to section 411 of the Plant Protection Act is or has been invalidated or vacated, the Secretary of Agriculture shall, notwithstanding any other provision of law, upon request by a farmer, grower, farm operator, or producer, immediately grant temporary permit(s) or temporary deregulation in part, subject to necessary and appropriate conditions consistent with section 411(a) or 412(c) of the Plant Protection Act, which interim conditions shall authorize the movement, introduction, continued cultivation, commercialization and other specifically enumerated activities and requirements, including measures designed to mitigate or minimize potential adverse environmental effects, if any, relevant to the Secretary’s evaluation of the petition for non-regulated status, while ensuring that growers or other users are able to move, plant, cultivate, introduce into commerce and carry out other authorized activities in a timely manner: Provided, That all such conditions shall be applicable only for the interim period necessary for the Secretary to complete any required analyses or consultations related to the petition for non-regulated status: Provided further, That nothing in this section shall be construed as limiting the Secretary’s authority under section 411, 412 and 414 of the Plant Protection Act.  Pages 78, 79

TRANSLATION:  If the Secretary of Agriculture has lifted regulations on “measures designed to mitigate or minimize potential adverse environmental effects” (genetically modified seeds/organisms - GMO) and those have been struck down (“invalidated or vacated” likely by a court due to public hazard, safety issues, etc.) the Secretary shall (not may, can, or should) immediately deregulate and allow use of GMOs.  This will be consistent with 411(a) and 412 (c) of the Plant Protection Act below.  Section 412 (b), scientific justification made transparent, is not required as part of the deregulation.  This is a temporary mandate (“shall”) for the Secretary.  It has to be temporary since Congress and the president cant’ get away with permanently barring court action to protect the public or permanently denying scientific input.

The phrase “measures designated to mitigate of minimize potential adverse environmental effects” is, it seems, tied to the term “biological control mechanisms” in the Plant Protection Act below.  This link is to a USDA decision to approve a Monsanto “biological control mechanisms” - genetically engineered corn.  (USDA approval of Monsanto corn: http://www.aphis.usda.gov/brs/aphisdocs/04_12501p_pea.pdf)

REFERENCED REGULATIONS ABOVE “411 (a) and 412 (c)”:  These sections of the Plant Protection Act are referenced in the amendment on the Secretary’s powers.  Section 411 (a) specifies who can import “any plant pest” unless authorized to do so “in accordance with” regulations.  But the first phrase, “Except s provided i subsection (c)” [411] lets the Secretary off the hook for any existing regulations by granting him the power to simply declare an exception and allow “any plant pest” in the country.  The legislation just passed takes science out of the equation as indicated by the exclusion of section 412 (b) concerning scientific input.   Note that subsection (b) requires  that regulations are “based on sound science and are transparent and accessible.”  The Secretary of Agriculture “shall”, by the new law just passed, abrogate the scientific requirement tied to regulation in this instance.

(a) Prohibition of Unauthorized Movement of Plant Pests.-Except as  provided in subsection (c), no person shall import, enter, export, or  move in interstate commerce any plant pest, unless the importation,  entry, exportation, or movement is authorized under general or specific  permit and is in accordance with such regulations as the Secretary may  issue to prevent the introduction of plant pests into the United States or the dissemination of plant pests within the United States.[Referenced in Senate bill]

(c) Authorization of Movement of Plant Pests by Regulation.-(1) Exception to permit requirement.-The Secretary may issue regulations to allow the importation, entry, exportation, or movement in interstate commerce of specified plant. [Added 3/29]

SEC. 412. [(a) and (c)] <> REGULATION OF MOVEMENT OF PLANTS, PLANT PRODUCTS, BIOLOGICAL CONTROL ORGANISMS, NOXIOUS WEEDS,ARTICLES, AND MEANS OF CONVEYANCE.

(a) In General.-The Secretary may prohibit or restrict the  importation, entry, exportation, or movement in interstate commerce of  any plant, plant product, biological control organism noxious weed,  article, or means of conveyance, if the Secretary determines that the prohibition or restriction is necessary to prevent the introduction into  the United States or the dissemination of a plant pest or noxious weed  within the United States.

(b) Policy.-The Secretary shall ensure that processes used in  developing regulations under this section governing consideration of import requests are based on sound science and are transparent and accessible.

(c) Regulations.-The Secretary may issue regulations to implement  subsection (a), including regulations requiring that any plant, plant  product, biological control organism, noxious weed, article, or means of  conveyance imported, entered, to be exported, or moved in interstate commerce-[Referenced in Senate bill]

What are they up to?

They’re doing this because they can and because the move benefits the huge  biotech agribusiness companies.  However, it looks a lot like they want to do this soon; when there’s a need to bypass regulation.  Why would they want to do that now or the near future?  Maybe there’s some hot product the corporate food industry wants to get to market in a hurry, so important they cant fool around with courts and studies of scientific safety.

There is too much exposure and bad publicity associated with this to make the move a typical example of legislative dominance.  There’s something up.  We’ll find out soon enough given the ubiquitous presence of corn and soy throughout the manufactured foods we eat everyday.