House Budget Committee Chairman Paul Ryan (R-WI) proposed a Medicare plan that combines Social Darwinism and a bailout for health insurance carriers, even larger than the one provided by the president’s health care reform legislation.

The specific features of the program are less important than the overall effect.  In summary, Ryan proposes a plan that will starve most of those sixty-five and older of health care.  Here are the numbers, based on Congressional Budget Office projections and elaborated by Dean Baker and David Rosnick  (in 2011 dollars) (Center for Economic and Policy Research, April 2011)

The Republican plan privatizes Medicare by 2022.  Seniors will choose their health insurance from corporate health insurance companies.  The government will make a lump sum payment ($6,097)  for this purchase.  Seniors will then make a beneficiary payment on their own and take responsibility for other provider payments.  The beneficiary payment will represent an increasing portion of median income from 2022 through 2050.  In addition, there are other provider payments estimated, like co-pays.  I added a fifth column, total senior payments, beneficiary plus other payments.

Seniors struggle now to meet their expenses, trading off essentials like medicine, winter heating costs, and other fundamentals.  Where are they going to come up with the total senior payments?   Many won’t have the money.

Here’s another look at the numbers, the beneficiary payments (not including other provider payments) as a percent of income by income status within the overall universe of those entering the system at 65.  Almost half of income goes to those at the 40th percentile on the income over a third for those in the middle.  Where will they get the money?  They don’t have it now.  Are we looking at a resurgence of the economy?  Will seniors continue working to make these payments, slaves to corporate health insurance providers?  Where will they find the jobs to make these payments?

Wasn’t Ryan among the group that worried about death panels in the Obama health care reform package?  It doesn’t matter to the Fox News constituency.  Whatever works at the time.  Now Ryan needs to balance the budget, he thinks.  How would you do that?  Let’s see.  Deny health care to the most vulnerable sector of the population, make them sick, and when they die, you’ve got further savings.

The Plan has no Credibility on its Face

There is so much wrong with the Ryan plan, there should be a law against it.  Here are just a few points:

The Ryan plan relies on hallucinogenic numbers.  Take the CBO projections for government, beneficiary costs, and beneficiary other expenses for 2022 and 2030.  They are $20,017 and $24,587 respectively.  Now call up your insurance company and see what the health insurance cost is for a sixty-five year old?  These are fully loaded costs which include premiums, deductibles, and out of pocket expenses.  Congratulations if you find one today for the 2030 figure of $24,587.  The  numbers in the Ryan plan come straight from Fantasy Island.

Ryan’s Medicare plan is the perfecta for the ruling class.

It enshrines the long ago discredited Social Darwinism theory.  Popular among the elite of the late 19th century, the theory argues that, “the strongest or fittest should survive and flourish in society, while the weak and unfit should be allowed to die.”  That’s exactly the way the world looks to Paul Ryan and his patrons.  Economic outcome determines existential reality.  If you can’t cut it, you’re left behind to die.  But first you have to suffer a while.

The second winner for the ruling elite comes in the form of a further bailout for health insurance carriers.  These are the folks who Just Say No on a regular basis and have trouble processing a simple claim.  President Obama’s health care plan bailed out these companies by ignoring the compelling rationale for a single payer system.  That wasn’t enough for the elite.  The Ryan plan puts them back in business with full membership in  the ultimate death panel, privatized Medicare.  Their profits will be endless.

A solution to the rising costs of health care is available.  It requires a change in behavior on the part of all members of Congress and a rational look at helping citizens take care of their health care problems.

The behavior change is straightforward.  Members of Congress and the executive branch have to actually think then translate those thoughts into words.  The thinking process starts with intellectual honesty.  You don’t take one part of the budget, Medicare, and beat the program senseless in order to address a much larger budget.

Just a shred of intellectual honesty would move those in charge to all areas of the budget.  How about a military budget that assures the nation’s defense without the requirement for world domination?  Let’s end the current wars overseas and pledge no future preemptive invasions like Iraq.

Stop balancing the budget by forcing seniors to suffer and die needlessly.

That eruption of rational behavior and discussion would lead to some useful analysis of the soaring costs of health care. 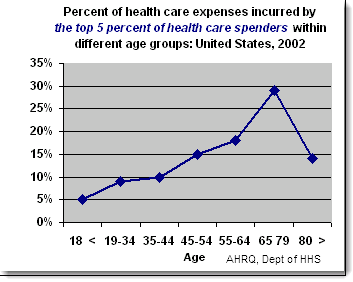 The incumbent geniuses look at this data and produce a plan that eliminates the offending age group with extreme prejudice.  Their opponents, just six degrees away on the political spectrum, are silent on the very real cost savings opportunity.

A rational approach dictates that we look at the health conditions of the 5% who use 50% of health care dollars with the goal of ameliorating or eliminating them. Diabetes, asthma, heart disease represent a large share of this 5% groups health care costs.  Why not target preventative and research efforts to substantially reduce the health problems of these citizens and, as a result, reduce the costs.  Cutting the 50% costs for 5% of the population to 5% is a reasonable target to start.

Putting citizens first is a foreign concept to our rulers, all of them. Taking care of people first to achieve a budget benefit, a huge budget benefit, is apparently beyond their pay grade.  That makes sense when you consider who is paying them, the unreformed Social Darwinists who forget that they win every game because they write the rules, select the umpires, and control the news.

This article may be reproduced entirely or in part with attribution of authorship and a link to this article.