Tropical Spring! One million hit the streets across Brazil 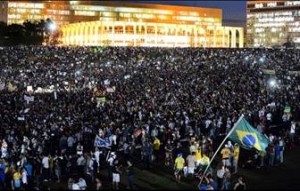 Sparked by a public transportation fare increase in Sao Paolo a week ago, an estimated one million people showed up in cities across Brazil expressing  discontent with the limited opportunities they face and an indifferent government.

“It’s not really about the price anymore,” said Camila Sena, an 18-year-old university student at a Wednesday protest in Rio de Janeiro’s sister city of Niteroi. “People are so disgusted with the system, so fed up that now we’re demanding change.”  USA Today, June 20, 2013

Like the protests in Turkey over the past weeks, this is an urban phenomenon dominated by the young.  Many are college educated and under or unemployed.  For most, these are their first political protests.  They chafe at wasted public expenditures.  In Rio, for example, the government spend millions for an international soccer tournament while the people idle away with few if any prospects for meaningful employment or a future.  (Image: Brasilia June 20 Semilla Luz) 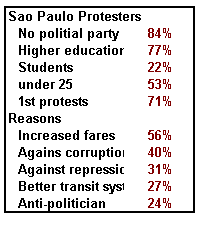 Public transportation fare increases have been rolled back in Rio, Sao Paolo, where the protests started, and other cities.  The crowds continued to grow.   Demands expanded from  fares to the general state of the economy and lousy governance.  This statement by Rio Mayor Eduardo Paes provides a clue to the indifference that the people see from the government:

“I come here after reflecting a lot on the topic, and I demonstrate that the twenty cents were not made with subsidies. We are going to suspend the increase that was implemented in the beginning of June. This concurs with the actions taken by the mayor of São Paulo, Fernando Haddad. However, we warn that we will have a loss of at least R$200 million for the city and we will have to redefine our priorities.” Eduardo  Paes, Mayor Rio de Janiero, Rio Times, June 20

The Mayor’s city and country is going up in smoke, massive protests in a nation not accustomed to mass action, and he’s been “reflecting on the topic.”  What topic?  Fare increases.  It’s not about that anymore.  The mayor would know that were he paying attention.  Its about a lousy government that is indifferent to the people.  So what does he do.  He decreases fares and, at the same time,  warns that other public service projects will suffer. (Table right:  BBC)

The mayor doesn’t get it?  Politicians around the world don’t get it.

The mass action in Brazil, the sustained protests in Turkey, the union backed protests in Tahrir Square, and Occupy Wall Street — these are all public outpourings by those left out of the workplace; those facing a future of diminishing opportunities.  They know what their leaders are doing about it.  Nothing!

“No more future” is simply unacceptable. 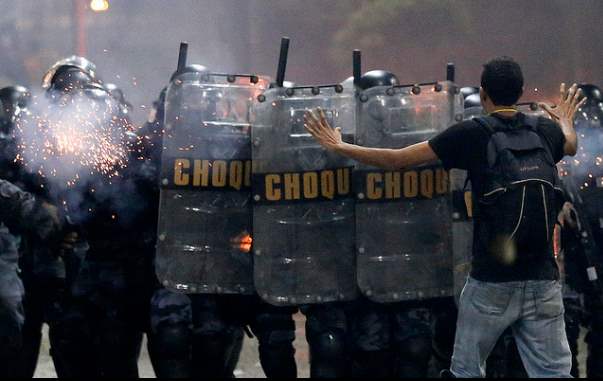